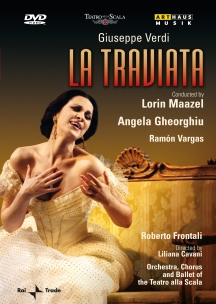 Realistics Revelations of intimate Inner PsychologyLa Traviata represents a milestone in musical history, marking a move from Romantic opera towards a greater degree of realism. For the first time ever, contemporary material and figures had been chosen as the basis for an opera. A real prostitute, tuberculosis, a so-called man of honour whose provincial morality collides with the more flexible and superficial world of the French capital, money, bourgeois righteousness versus high-society superficiality and decadence – themes such as these have become well established on the operatic stage since then.The legendary soprano Rosa Ponselle was right when she said of the huge range demanded of the title role, from the brilliance of Act I to the pure lyricism of the final “Addio del passato” that anyone singing Violetta should have four voices – a different one for each scene ...Liliana Cavani and Dante Ferretti’s Traviata production was revived in the summer of 2007. The title role was sung for the first time at La Scala by the Romanian star soprano Angela Gheorghiu, who sings and plays the title role of Violetta overwhelmingly, with the Mexican tenor Ramón Vargas as Alfredo. Giorgio Germont was sung by Italian Roberto Frontali. The conductor Lorin Maazel reaped massive protests from the audience by removing this last figure’s baritone cabaletta “Non udrai rimproveri” (“I will hear no reproaches”) from the finale of Act II, he had to give in to the pressure from the audience for musical completeness and reinstate it. Who says no-one feels passionate about culture any more? Opera and passion are still part of the Italian culture and lifestyle!Liliana Cavani’s production of La Traviata offers a wealth of psychological and realistic detail within a conventional/ realistic scenic framework.