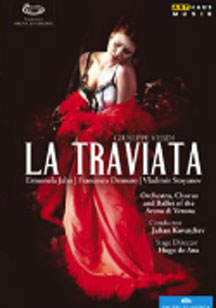 “La Traviata” is not only one of Giuseppe Verdi’s best known works but ranks among the most popular operas of all times. Based on the novel and play “La Dame aux camélias” by Alexander Dumas (fils), the tragic story of the terminally ill courtesan Violetta who falls in love with the young gentleman Alfredo Germont has moved audiences to tears for more than 150 years.This lavish new production of Verdi’s masterpiece is staged by Argentine director Hugo de Ana, a regular guest at the world’s most prestigious opera houses and acclaimed for his spectacular scenery sets and his special use of light. The extra-large stage of the Arena di Verona is his ideal challenge. Ermonela Jaho, an intense and dramatic Violetta, and Francesco Demuro, an elegant Alfredo, are both making their Arena debut. Vladimir Stoyanov, giving a commanding yet refined Germont, completes the exquisite trio of protagonists under the baton of acclaimed conductor Julian Kovatchev.