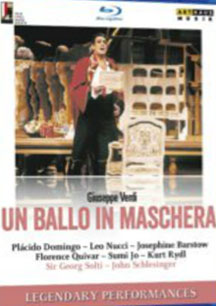 Arthaus releases on DVD another gem from the archives of Austrian Television. The outstanding production of Verdi’s Masked Ball at the Salzburg Festivals 1989 and 1990 was Herbert von Karajan’s legacy to the Festival. Supported by a cast of superlative actor-singers in opulent scenery, Sir George Solti agreed to conduct the opera at short notice after Karajan’s unexpected death in 1989. The production had been expected to be a highlight in Karajan’s series of Verdi operas at Salzburg. Karajan’s celebrated ability to unite a cultivated sound with dramatic effects was known to create extraordinary and highly acclaimed opera events. For Un ballo in maschera Karajan planned something unusual: He would not set the opera in colonial Massachusetts, as the censors had forced Verdi to do when he was composing the work, but in Stockholm in the 1790s at the court of King Gustav III of Sweden, as Verdi had originally conceived his work. Together withthe film director John Schlesinger and his stage team, Karajan developed a concept that promised theatrical splendour equal to the musical excellence that the conductor and the handpicked cast of singers would surely provide in collaboration with the Vienna Philharmonic Orchestra. But this was not to be: stage rehearsals had already begun for the opening performance of the 1989 festival when Karajan died on 16 July. Therefore it was extraordinarily lucky that a conductor of Sir Georg Solti’s standing, was prepared to undertake the task just a week before the premiere, and with the whole world watching. He and the staging by Hollywood film director John Schlesinger was acclaimed by audience and press alike.