Film noir meets great American Western in the Outback. Where worlds collide. From the director of Mystery Road. 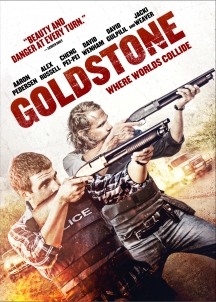 Indigenous Detective Jay Swan (Aaron Pedersen, Mystery Road) arrives in the frontier town of Goldstone on a missing persons inquiry. What seems like a simple investigation opens a web of crime, corruption, trampling of indigenous people's land rights, and human trafficking. Jay must pull his life together and bury his differences with young local cop Josh (Alex Russell, SWAT), so together they can bring justice to Goldstone. Also starring 2-time Academy Award nominee Jacki Weaver (Animal Kingdom) as the corrupt mayor, David Wenham (Lord of the Rings) as the evil mine manager, Cheng Pei-Pei (Crouching Tiger, Hidden Dragon) as the unscrupulous madam, and David Gulpilil (Crocodile Dundee) as the indigenous man who can't be bought.

Riveting! The next great Western movie. You don't wanna miss this one.

Gorgeous! A masterpiece of outback noir. *****

Beauty and danger at every turn.

The physical and emotional wallop of the best westerns.