1-Here Comes The Night is a studio album from 1991 recorded while Graham was in Australia. 2-Graham Bonnet live at various locations around the world. 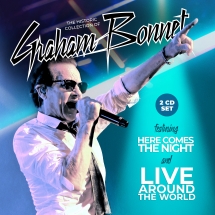 Here Comes The Night was a studio album from 1991 originally recorded while Graham was in Australia, it features a return to the pop format after many years fronting heavy rock acts. Included here is a re-recording of the Marbles hit "Only One Woman" "We present 'a best of Graham Bonnet live' at various locations and around the world throughout the years of his considerable career. These songs musically span his time as a member of Rainbow, Michael Schenker Group, Alcatrazz, Impellitteri and a number of his solo hits."