Gramercy Arms - The Season Of Love

Second album from this collective of musicians featuring Llyod Cole, members of Guided By Voices, Belly and more 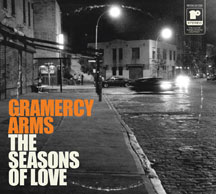 ...Testimony to the kind of clever rock and pop that prizes craft, structure and arrangement without sacrificing joy.

Soothing and playful - a tonic to credit-crunch worries

It's impossible to fight the catchiness