Grant Stewart - The Lighting Of The Lamps 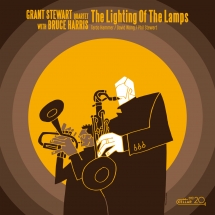 The latest album from tenor saxophonist Grant Stewart joins him with trumpeter sensation Bruce Harris Like the vibe in New York City where Stewart lives, the music on this invigorating recording has a dynamic spirit. Along with Harris the set features an all-star quartet with Tardo Hammer on piano, David Wong on piano and Phil Stewart on drums recorded live at the renowned Rudy Van Gelder studios in Englewood Cliffs, New Jersey. Includes 8 tracks including some original compositions and the band's take on classics like "I'm A Fool to Want You" originally recorded by Dexter Gordon in the same studio in 1965! Right from the first song there's an expectant anticipation about where Stewart and the musicians will go with the uniquely curated repertoire. They deliver on the promise, with ardent jazz that both honors tradition and sounds timeless.

'Grant is one of the most innovative musicians still carrying on the tradition of jazz, which encompasses bebop, swing and a little avant garde.'

'One of my favorite tenor players in the world!'

'Stewart has gone and done it-he's released a perfect album of classic -style jazz... half a century after bop's heyday, Grant Stewart is one practitioner who finds new ways to express himself through it'

—Steve Greenlee, All About Jazz

'Sonny Rollins can readily be heard in Stewart's style , but he has parlayed this into his own distinctive sound... his muscular approach and deft use of space are enhanced by his unique sense of swing...

some folks still play old-school hard bop with its grits-and-greens feeling, though rarely with the punch of Grant Stewart's The Lighting of the Lamps, fresh enough to make the music sound newly minted

An exceptional 8 tracks, Stewart and company make for a thriving and sonically exciting listen embraces all the hallmarks of jazz that we will never tire of

This is the type of session that bebop fans love

Tenor saxophonist Grant Stewart is no stranger to musical tribute