Grant turns out a fluid, brilliant solos that sail over the bass and drums with grace and panache. 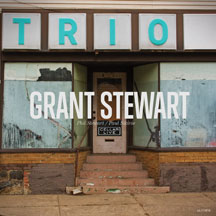 When Toronto-born Grant Stewart came to New York in 1990 at the age of 19, he came prepared. He'd grown up a house filled with jazz thanks to his guitarist father who steered him at age ten to the saxophone. By age 14, he began taking the instrument seriously and investing time and effort into mastering it. With help from the Canada Council For The Arts he moved to New York City to further his studies at an ideal time. The jazz scene was on a rebirth cycle with small clubs popping up all over the city, recording activity on the upswing and talented, young musicians networking and learning from one another. He studied with Donald Byrd, Joe Lovano, George Coleman and Barry Harris and began hanging out with students at the New School where he met Brad Mehldau and Peter Bernstein among others. In 1992, he made his first album for Gerry Teekens's Criss Cross; a dozen more albums would follow over the years including a guest appearance on Cellar Live's Miles Black Trio