They're destroying our world. Now is the time to stop them. 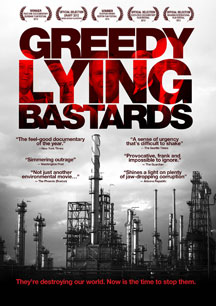 Hurricanes, wildfires, droughts, windstorms, floods...Climate change is no longer a prediction for the future, but a startling reality of today. The Pentagon believes it to be a matter of national and international security. Yet, as the evidence of our changing climate mounts and the scientific consensus proves a human causation, there continues to be no political action to thwart the warming of our planet. Greedy Lying Bastards investigates the reason behind stalled efforts to tackle climate change despite consensus in the scientific community that it is not only a reality but also a growing problem that is placing us on the brink of disaster. The film details the people and organizations casting doubt on climate science and claims that greenhouse gases are not affected by human behavior. Filmmaker and political activist Craig Rosebraugh, in association with Executive Producer Daryl Hannah, documents the impact of an industry that has continually put profits before people, waged a campaign of lies designed to thwart measures to combat climate change, used its clout to minimize infringing regulations and undermined the political process in the U.S. and abroad.

This propulsively single-minded attack on climatechange deniers by Craig Scott Rosebraugh may just be the feel-good documentary of the year.

Dispenses with conveniences and niceties and goes straight for the jugular'