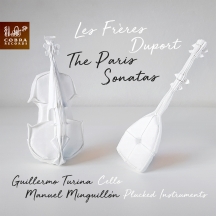 Thanks to their constant work and effort to improve their technique the Duport brothers left a legacy: the origin of the Romantic cello, not only through the evolution of the works they wrote themselves, but also thanks to the ones other musicians wrote for them. All the music selected for this album has never been recorded before; it is of the Duport brothers' youth years which was published in Paris. Some of these sonatas might have even been played in their first concert in the Tuileries Palace in Paris. The sonatas by Jean- Pierre are part of his first two books, published between 1766 and 1772. The three sonatas by Jean-Louis are the whole of his second opus.

Guillermo Turina (cello) and Manuel Minguillon (archlute and guitar) are renowned musicians who both have played as soloists and in orchestras all around the world. The choice of plucked string on this CD as an accompanying instrument could seem a bit anachronistic, being a repertoire that is close to Classicism. This decision, however, was made with an approach to the style and sound that the Duport brothers presented in the Concert Spirituel. As published many times in the Mercure de France newspaper between 1763 and 1765, Jean-Pierre Duport used to play regularly in the Paris chambers alongside Bohemian lutenist Josef Kuhaut, even though the lute was hardly ever being used any more.

Guillermo Turina has made two previous successful recordings on COBRA records together with Eugenia Boix and Tomoko Matsuoka Francesco Supriani: Principles to learn to play the Cello and Giacomo Facco: Master of Kings.