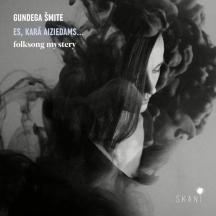 I have interwoven an unanswered, and perhaps unanswerable, question in this story, namely, who of us is prepared to risk our life and happiness in the name of a larger idea? As the rich heritage of Latvian folk poetry confirms, such a thought has preoccupied Latvians for centuries. These countless verses express the human frailties that surface when a young man is called to war. A woman stands next to him, be it a mother, sister or bride, and reacts bitterly to his departure and absence.

"As I go off to war..." does not provide an answer to whether it is worth sacrificing one's life to the war machine. It does not glorify heroism; on the contrary, it reveals the fragile internal world of humans that is destroyed in war. Through my music and the poetic language of the dainas I have aspired to express a poignantly human and undoubtedly pacifist message. The musical frame centering on the mythical blacksmith's wife points to the cyclical and ever-renewing nature of war. Will a new era arrive, in which we look back at the horrors of war as a thing of the past that the strength of the human spirit has defeated?

"As I go off to war..." is a cyclical composition in ten parts that follows the path of a soldier: farewells, absence, return. The first and last parts serve as a seemingly timeless introduction and postlude. The structure of the cycle is linked together by four electronic interludes that act as transitions to each next stage. The music reflects the unique style of the Arcandela ensemble, which performs a fusion of folk, jazz and classical music. The dainas texts inspired me to create an acoustic world in which I strived to bring together an archaic and contemporary palette of sound. - Gundega Smite.