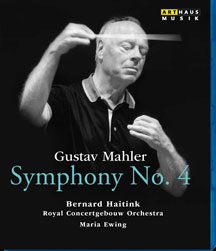 Bernard Haitink is one of the most sought-after Mahler conductors of our day. In this concert of Mahler’s „Fourth Symphony“, recorded live from the Concertgebouw in Amsterdam, he conducts the Royal Concertgebouw Orchestra. The American Maria Ewing fascinates with her interpreation of the soprano solo featured in the work’s finale. Bernard Haitink first conducted the Concertgebouw Orchestra in 1956. Beginning in 1963, Haitink was chief conductor for 25 years, during which time the orchestra developed significantly. Particularly Haitink’s interpretations of Mahler and Bruckner made a worldwide impression. The Concertgebouw Orchestra was founded in 1888. On the occasion of its 100th anniversary in 1988, the orchestra officially received the appellation ‘Royal’.