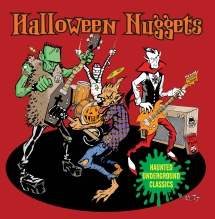 This compilation takes its cues from the term 'Nuggets' as much, if not more so, than 'Halloween.' This release is in the same vein and tradition that brought forth Lenny Kaye's Original Artyfacts and the long-missed trove of Tim Warren's Back from the Grave compilations from Crypt Records: someone 'mines' out under- and mis-appreciated garage and surf tracks long lost, dead, and buried by the heavy-handed broad strokes of the 1960s._

Where previous similar compilations were typically 'midrange and mono muddy' in their raw surviving forms, Randy Perry has done an excellent job of leveraging modern technology to clean and refine these tracks, giving them an even more timeless shiny polish