The Happiness Of The Katakuris Blu Ray/DVD

The Sound of Music meets Dawn of the Dead 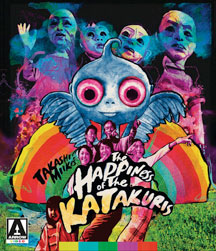 From Takashi Miike, the prolific director of such shocking hits including Audition and Ichi the Killer comes "The Sound of Music meets Dawn of the Dead"! The Katakuris are a family trying to run a peaceful country inn but with a lack of guests there is much excitement for their first visitor, until they wind up dead! As each guest in turn dies in strange circumstances the family agree to hide the bodies but will the coverups come back to haunt them... In The Happiness of the Katakuris scenes of grotesque stop motion animation, surreal musical numbers and zombies combine to make one of the finest horror-comedies ever made.

If you need to see just one of Miike's thousand films this summer, this corpse-littered musical farce should be it.

Anyone with a weakness for song-and-dance dementia on the level of Forbidden Zone and Cannibal! The Musical will find all this irresistible

Arrow Video continues to bring underseen gems of cinematic ridiculousness to a broader audience with care and as much grace can be had by Takashi Miike and the like.

Arrow Video has also created a stellar Blu-ray package for the film's high-definition release, including an impressive transfer, and a boatload of supplements. On the quality of the package alone, this set easily earns a recommendation.