When a coked-up YouTube search by a struggling artist leads to an Insane Clown Posse knock-off, his subjects are found. 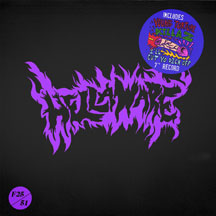 "A trippy indie odyssey." - Andrew O'Hehir, Salon "What might happen if Jim Jarmusch directed an episode of "Girls." - Eric Kohn, Indiewire HELLAWARE gently satirizes the world of high-brow art through the eyes of a wannabe photographer who becomes consumed by the bright lights of mainstream success. Jaded by the "incestuous, New York, socialite shit" that sells at prominent art galleries, Nate (Keith Poulson) embarks on a quest for a more authentic brand of contemporary art. When a coked-up YouTube search leads to a music video from Delawarean Goth rappers Young Torture Killers, an Insane Clown Posse knock-off, Nate knows he's found his subjects. He soon drags his friend-with-benefits Bernadette (Sophia Takal) to rural Delaware to shoot the group playing in their parents' basement. To "immerse himself" in the group's culture and add an extra layer of realism to his work, Nate befriends the rappers and makes return trips to get to know them. But as his relationship with group develops, he becomes increasingly aware that, while you can take the boy out of the art world, you can't take the art world out of the boy. 52 page Book/DVD/7" The Book: Forward by Abel Ferrara Essays by Nick Pinkerton, Michael Chaiken, and Sean Price Williams Photography by Eleonore Hendricks "The Story of the movie Hellaware and the Fake Horrorcore Band That Went Viral" by me from Noisey.com Original art by Mike Diana The 7" by The Young Torture Killers: Original art by Mike Diana I'll Cut Yo Dick Off And the "slowed and chopped" remix The DVD: Hellaware Deleted/extended scenes Music video for "I'll Cut Yo Dick Off" Directed and Written by Michael M. Bilandic Produced by Spencer Kiernan and Rachel Michelle Fernandes Cinematography by Sean Price Williams Editing by Jason Giampietro Additional Editing by Robert Greene Photography in film by ElÃ©onore Hendricks Starring: Keith Poulson, Sophia Takal, Kate Lyn Sheil, Brent Butler

'A sharp-edged comedy of subcultures in collision.'

''Hellaware' feels like a throwback, with scenes bringing to mind John Waters's 'Pecker' or the sensitive actor at a party who asks Annie Hall to touch his heart with her foot.

'What might happen if Jim Jarmusch directed an episode of 'Girls.'

'Taking satirical aim at the pretensions of Brooklyn hipsters and the New York City art gallery scene is like shooting fish in a barrel, but director/screenwriter Michael C. Bilandic (Happy Life) pulls it off with rough-hewn aplomb in his ultra-low-budget sophomore feature.'