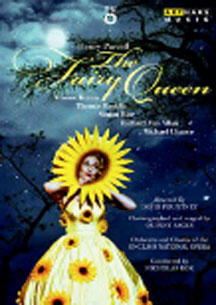 The new production of Purcell’s The Fairy Queen launched in 1995 by the English National Opera (ENO) was received with great enthusiasm by both the public and musical press. Under the musical direction of Nicholas Kok, the English National Orchestra played a baroque music which was as crystal clear as it was expressively infectious. Next to outstanding performers of the dancing roles such as Puck (Simon Rice) and the Indian boy (Arthur Pita), an entire armada of excellent singers was summoned up such as one seldom experiences together on the baroque opera stage. These included Yvonne Kenny as Titania, Thomas Randle as Oberon and Richard Van Allan as King Theseus. Jonathan Best, with his comic portrayal of the drunken poet, was loved by the audience and praised highly by the press, while other singers like Michael Chance, Mary Hegarthy, Janis Kelly, Marc Le Brocq and Christopher Ross all contributed their talents to produce an unusual musical theatre experience, released on Blu-ray for the first time.