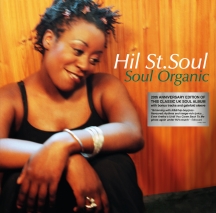 Zambian-born vocalist Hilary Mwelwa and producer/musician/songwriter Victor Redwood-Sawyerr (VRS) had been working away in a North London studio creating a unique blend of neo soul, jazz and R&B that had critics on both sides of the Atlantic in raptures. Billboard magazine enthused: ''Brimming with R&B/hip-hop/jazz-flavoured rhythms and image-rich lyrics... Even Aretha's ''Until You Come Back To Me'' glows again under Hil's touch''. And talking about the lead single ''Strictly A Vibe Thang'', US magazine Radio & Records were smitten: ''You can't sit still on this one. While listening to this infectious tune you got to move something - even if it's just your big toe!'' In the UK Echoes magazine called it ''one of the best UK soul albums ever''. ''Strictly A Vibe Thang'' charted on the Billboard R&B Singles chart, following in the footsteps of Loose Ends, Soul II Soul and Brand New Heavies, while Hil's acoustic take on the Stevie Wonder-composed ''Until You Come Back To Me'' came out of nowhere to be a sensation at America's Smooth Jazz radio format. It ended 2000 as the most-played vocal track of the year across US Smooth Jazz radio stations, and in the ensuing two decades it has been the most-downloaded - and one of the most-streamed - tracks on the Dome label. Also heavily played: the joyful mid-tempo groove of For Your Love.

This 20th Anniversary Edition of the album - now in a gatefold sleeve - includes three bonus tracks not included on the original vinyl release: the acoustic version of Until You Come Back To Me, the VRS Remix of Just A Matter Of Time, with it's insidious groove, and Down To Business.

Hillary Mwelwa and Victor Redwood-Sawyerr are the guts of Hil St. Soul, with Mwelwa's flawless leads serving as the focal point. She's the cream of a crop of young contemporary R&B female singers (who are poppin' up like dandelions), and she dispels any doubts with regard to her vocal ability on this sparkling debut of mostly self-written songs. There are no weak tracks, just some that are superior to others, and a lot to like, including two versions of ''Until You Come Back to Me'' (popularized by Aretha Franklin), ''Strictly a Vibe Thang,'' ''Higher Ground,'' ''There for Me,'' ''Together,'' and, for those with wanderlust, ''Free Spirit.'' These picks are purely subjective, as you won't reach for the remote to skip any tracks when they cue.