A Deconstruction of the Abduction 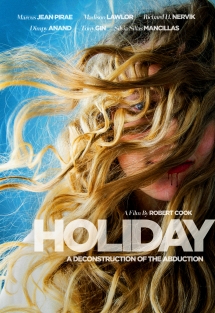 Graham takes one last job from a dubious wealthy Mumbai businessman, Mr. Bhatia. He knows what Bhatia wants and travels to Venice Beach to find it. Anne arrives at Venice Beach to spend her spring break and runs into Graham as she searches for a vegan restaurant. Graham and Anne hit it off. Graham takes Anne for a ride in his vintage Porsche along the Pacific Coast Highway, and then to his boat. In the boat Graham drugs Anne and she passes out. But just as things are going Graham's way, an old Russian nemesis closes in. Graham spies the Russian and with Anne stowed away he heads out for open ocean water. Graham calls Bhatia and tells him he has the product, but they need to push the meeting schedule up. Bhatia agrees and Graham powers all night to Mexico, as haunting visions flash before him. Graham secures Anne in his Mexican hideout and prepares for her sale. The next morning the Russian speaks with Bhatia and heads to Mexico to kill Graham, Bhatia, Anne, and anyone else around. Graham searches a small Mexican town for a car, but takes to long and the drugs he gave Anne wear off. Anne escapes just before Graham returns. At the camp, Graham sees Anne running in the road and chases her on a quad-bike. Smashing down a jungle trail, Anne tumbles into Jesus, who rescues her and takes her to rest in his cave. Graham finds them, kills Jesus, and returns Anne to his camp. Graham drives Anne to Bhatia's Mexican home with the Russians close behind. Violence erupts as all of these enemies and their henchmen are forced together. Anne attempts one last escape as Graham fights to stay alive. The day does not go well for anyone involved.