Biker Trash vs. the Hollywood Mafia! 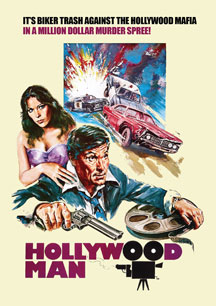 Big action film star Rafe Stoker is just trying to finish his movie. Having run out of his own funds, he turns to the people he knows have the cash on hand, the mafia! After some shady business dealings, he gets the money and promises a movie, and payback, in four weeks. But turning a profit in Hollywood is not always a sure or quick thing, so a gang of sleazy redneck bikers try to sabotage the picture for Stoker's collateral. With killer cops, sicko snipers and a bevy of beautiful, willing women on his trail, Stocker is going to make this movie whether he lives ... or dies trying! A 1970s action classic.