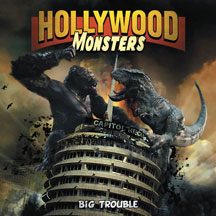 Hollywood Monsters are the brainchild of vocalist, guitarist, composer, StÃ©phane Honde, a French expatriate, who after living in Los Angeles since 2012, recently moved to Sacramento, California) Honde first became noticed when fronting Mamooth, subsequently garnering a well-deserved reputation as a guitar virtuoso when playing in CafÃ© Bertrand, a French rock group he joined in 2004. The band toured, playing humongous stadiums such as the Stade de France, with an audience capacity in excess of 80.000 - performing with classic rock giants such as AC/DC and Deep Purple, the latter for whom they opened on thirty-six dates across Europe in November 2006, and another 12 in March of 2007. Honde recorded two albums with CafÃ© Bertrand - both critically acclaimed and commercially successful - "Les Airs EmpruntÃ©s" (2005) and "L'Art DÃ©licat du Rock'N'Roll" (2008), before leaving the band in 2011. Honde then embarked on a length tour with Paul Di'Anno, oriignal voaclist with Iron Maiden before absconding to California. Once in Los Angeles StÃ©phane Honde befriended Tim Bogert, coaxed him out of retirment and convinced Bogert to play on his debut album...and voilÃ , the Hollywood Monsters were born. StÃ©phane Honde recently signed an agreement with Mausoleum Records for the release of the debut album entitled "Big Trouble" by his new band: Hollywood Monsters, scheduled for release in May 2014. The talented Hollywood Monsters line-up on "Big Trouble," besides Tim Bogert (Vanilla Fudge, Cactus - on bass, additionally welcomes the performances of some more of StÃ©phane's talented pals, including: Don Airey (Deep Purple, Whitesnake, Michael Schenker and dozens more - on keyboards), and Vinnie Appice (Dio, Black Sabbath - on drums), the latter for whom StÃ©phane had written the song "Village Of The Damned" as an hommage...before ever meeting Vinnie!