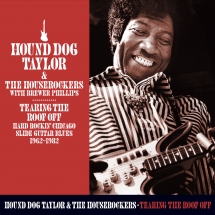 'When I die, they'll say 'he couldn't play shit, but he sure made it sound good!'' Hound Dog Taylor While producing this set JSP's John Stedman remarked ''the reason this music is so tough, it's played by tough old bastards.'' Hound Dog Taylor and The HouseRockers (Hound Dog on slide guitar, Brewer Phillips on guitar and Ted Harvey on drums) were indeed tough - both on and off stage. Greg Lawrie, a musician who toured with Hound Dog during a 1975 Australian tour (with Freddie King, Sonny Terry and Brownie McGhee, Alexis Korner and Duster Bennett) described Hound Dog and the HouseRockers as ''one of the rock 'n' rollinest bands ever, completely authentic, 100% raw blues, real rock and roll blues. Hound Dog tore the roof off every night with his slide guitar. He was a fantastic player, very basic, but he hit what needed to be hit, no more, no less.'' Bruce Iglauer described Brewer Phillips as: ''The rawest and most energised bluesmen I ever heard. His playing and singing were totally unpolished. He took lots of musical chances and made tons of mistakes, but his playing was full of infectious rhythmic drive, and he had more fun on the bandstand than virtually anyone I've ever seen.'' Brewer's guitar sound is described as ''deep rooted in the Delta blues'' and as having an ''ice pick-in-your-ear sheet-metal tone produced from his battered Telecaster executed with a thumb pick and bare fingers.''