Final album from this iconic Chicago band following the death of their beloved drummer. Pop Masterpiece 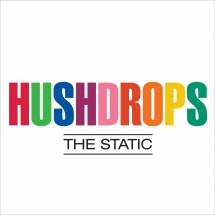 "Though all three have given freely of their time and talents over the years (San Juan to Material Issue, Liam Hayes/Plush, Josh Caterer, the Webb Brothers, Kevin Tihista, etc., Shapiro to Veruca Salt, and Camarillo to the Waco Brothers, NRBQ and many more), it was Hushdrops that each considered his musical and spiritual home. "None of us played like this with anyone else", says Shapiro. After briefly drifting apart following the touring/promotional cycle for 2014's Tomorrow (a scrappy and raw double album, rendered in glorious mono), the music on The Static was developed with all of the renewed dedication, energy, and purpose of three friends/musical soulmates - more thankful than ever to have returned to their natural collaborative state.