Seen nightly on The Tonight Show with Jimmy Fallon, saxophonist Ian Hendrickson-Smith stretches out with a soulful date. 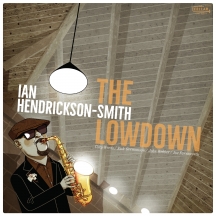 Saxophonist from The Roots, seen nightly on The Tonight Show with Jimmy Fallon.

New York City based saxophonist and flutist Ian Hendrickson-Smith is mostly noted for his remarkable tone, soulful approach and blues driven melodies. Equally adept on all the saxophones, Ian stays very busy doing what he loves and loves staying busy!

From 2004 to 2010, Hendrickson-Smith maintained an intense recording and touring schedule as a member of Sharon Jones and the Dap-Kings.

If you're looking for backstage stories about Lady Gaga, Bob Dylan, U2, Amy Winehouse, Sharon Jones, or Ed Sheeran, consider buying Ian Hendrickson-Smith a drink when he visits Vancouver next week; the saxophonist has worked with them all. When it comes to dishing the dirt in an on-the-record interview, however, the New York resident turns out to be blessed with as much tact as he has talent--or else his memory is starting to go after spending more than 700 days on late-night TV.

Hendrickson-Smith's big, open, bluesy sound is reminiscent of alto masters Cannonball Adderley and Jackie McLean. The band's conception, in both quartet and sextet configurations, harkens back to the sound and feel of the Blue Note sessions of the early