Ian Pace - The Anatomy Of Melancholia

''The Anatomy of Melancholia'' is a disc of piano music by Marc Yeats featuring virtuoso pianist Ian Pace. 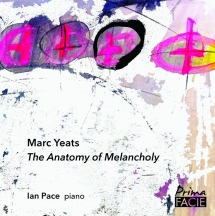 In the words of the composer: ''Ian Pace is a phenomenal pianist, a man whose musicality and intellect I have admired for many years. I have heard him fearlessly play some of the most challenging music of our time with huge flair, passion, insight and musicality.

I've been writing piano music since 1997 and over the years have built up a substantial catalogue of works, many of the pieces highly ambitious and virtuosic beyond normal pianistic expectations. I have dedicated many of these pieces to prominent international pianists, but across the years - due to a number of factors, mainly around the music's enormous challenges - only a tiny handful of the pieces (often the least frightening and shortest of them) have been performed live, and until now, none were recorded.

In this amazing collaboration with Ian, for the first time, I have found a pianist who not only enjoys and can meet these musical challenges but is a pianist who actually wants to perform this work because of the very nature of the writing itself. This album is the first recorded collection of my piano works, ranging from 1997 to the present day, and includes pieces deemed by many pianists to be too challenging to play.''

Marc Yeats is one of the UK's leading contemporary composers with his works having been performed by the BBC Philharmonic Orchestra, Hallé Orchestra, broadcast on BBC Radio 3 and stations across Europe, Asia and Australasia. Described by Peter Maxwell Davies as ''breathtakingly original'', and Professor Stephen Davismoon as ''one of the most prolific and influential composers and creative artists of his generation in the UK'', Marc's music explores transduction, complex sonic, perceptual, asynchronous and polytemporal relationships, sonic flux, contextual, harmonic and temporal ambiguities, polarised intensities and a visceral joy of sound.