Iggy And The Stooges - Raw Power Live: In The Hands Of The Fans

Vinyl document of the Stooges destroying All Tomorrows Parties 2010. 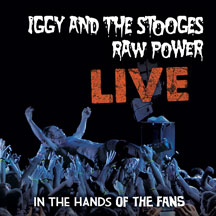 Vinyl document of the reformed Stooges' (Iggy Pop, Scott Asheton, James Williamson, Steve Mackay, Mike Watt) "Raw Power" performance at All Tomorrow's Parties in September 2010. A mind-blowing night for sure. Iggy and the band sound flawless as they rip through the archetype riffage of "Search and Destroy," "Raw Power," "Gimme Danger" and more. Punk rock, no doubt. "Getting this top-notch performance of the entire Raw Power album by The Stooges realized a life long dream. This shit really sizzles and we are so obviously a crack band in a class of our own." -Iggy Pop

On the first night of the annual All Tomorrow's Parties festival here at Kutsher's Country Club, Iggy Pop, now 63, knew that his body language translated into still photographs resembling Mannerist paintings ... the Stooges attacked the album's eight songs, in a different order, just about perfectly.