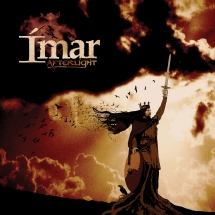 Glasgow's hottest new folk property, five-piece Imar have created more than a bit of a stir in little over a year since their formation. Their debut video, unleashed to the world during Celtic Connections 2016, has been viewed in excess of 200,000 times - whilst their touring credits already including the opening set at that year's Cambridge Folk Festival and headlining a stage at Belgium's Dranouter Festival just a week later. The Irish and Manx flavoured quintet's debut album 'Afterlight' is here. With a line-up featuring members of Mánran, RURA, Talisk and Barrule, and a heavyweight collective haul of top prizes - including the 2016 BBC Radio Scotland Young Traditional Musician of the Year, a BBC Radio 2 Young Folk Award, nine All-Ireland and eight All-Britain titles - the group's formation embodies a personal reconnection with its members' formative years, dating back long before their recent camaraderie around Glasgow's justly celebrated session scene.