Indiepix Classics: A Life Among Whales

Introducing whale songs - and the unique relationship between humans, whales, and environmental activism. 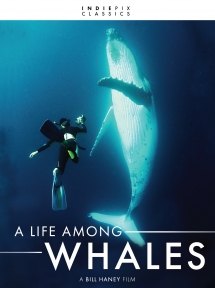 Weaving together natural history and biography, A LIFE AMONG WHALES is a fascinating exploration into the unique relationship between humans and whales, as told by renowned marine biologist, bio-acoustician and activist Dr. Roger Payne. For four decades Payne has advanced the boundaries of science and environmental activism - from his pioneering work on whale vocalizations in the 1970 bestselling album "Songs of the Humpback Whale" to continued his study of ocean pollution today. With hauntingly beautiful imagery, this film forces us to question our stewardship of the Earth and our coexistence with some of its most majestic and intriguing creatures.

This is a splendid film. It both soothes and shocks, as it introduces the viewer to the world's largest mammal and to the senseless carnage of whale hunting. Its message though is one of hope. Hope that there is still time to give back the ocean to this majestic creature. But we must begin now.

This is a beautiful film and a devastating film. It captures in words and images the majesty of the world's whales while chronicling the life and work of biologist Dr. Roger Payne. It is a cause for hope, as it shows how Payne's work in the 1960s and 1970