Some Games Can Lead To Murder 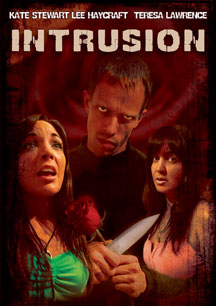 Holly Jensen leads an overly dramatic life. It's one that is spent trying to avoid her problems and forget the past. Best friend Kali has the perfect solution to making Holly feel better. It's a game called "Wrong Number". However, the man on the other end finds the joke less than funny and decides to play a game of his own. A game where Holly will become the pawn. It's a character-driven thriller where everything has consequences and something as beautiful as a rose can be turned into any woman's, worst nightmare.

What a great film and talented cast! I was very impressed!

Thrilling actually, causing me to sit up straight. It's done with a real feel and intensity that gives INTRUSION that little something extra over a run-of-the-mill, small budget, knife-weilding killer flick!

This horror film has all you could want in a small budget; hot lead actress, boobies, lots of blood, and, holy shit, a plot that's actually worth paying attention to!

Craig Everett Earl brings back the horror of the 80's!