"I feel more like I do now than when I first got here." -- Professor Irwin Corey, The world's foremost authority 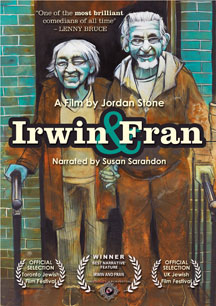 At 100 years old, Professor Irwin Corey finally reveals the magic behind his subversive and sophisticated double-talk. Irwin and his chain-smoking wife, confidante and #1 fan, Fran, afford filmmaker Jordan Stone intimate access to their lives and the inner workings of "The World's Foremost Authority," aided by legendary comedian, political activist and civil rights advocate, Dick Gregory. A former Golden Gloves boxing champion, Professor Corey entered comedy on the Borscht Belt circuit and went on to appear on TV shows including Steve Allen, Jack Paar, Johnny Carson, Ed Sullivan, Andy Griffith, Dick Cavett, Merv Griffin, David Letterman and many more. In 1960 Corey ran for President on Hugh Hefner's Playboy ticket. Blacklisted at the peak of his career, the centenarian comedian now returns with Fran at his side as he unbuckles the controversial wisdom of 77 years of pure comic genius, all the while showcasing New York City and his remarkable place in its pantheon of comedic legends. Narrated by Susan Sarandon.

Corey is a cultural clown, a parody of literacy, a travesty of all that our civilization holds dear, and one of the funniest grotesques in America. He is Chaplin's tramp with a college education.

***An entertaining profile of a comic original. Recommended

One of the most brilliant comedians of all time.