J.J. Johnson and Kai Winding were among the leading innovators and primary exponents of the trombone in modern jazz, 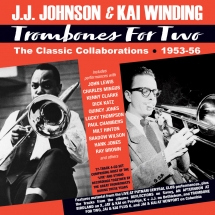 J.J. Johnson and Kai Winding were among the leading innovators and primary exponents of the trombone in modern jazz, exploring the instrument's potential in the challenging musical era following the emergence of bebop in the 1940s, where trumpet and saxophone were more suited to the medium's rapid tempos and demand for technical mastery. Having established their reputations as soloists, they came together in 1953 for the first time to collaborate on a series of projects in different group environments. This 77-track 4-CD set features most of the titles they recorded together during this period before they went their separate ways again. It includes material from the "Live at Putnam Central Club" performances plus tracks from the albums "Reflections" on Savoy, "An Afternoon At Birdland" on X, "Jay & Kai" on Prestige, "K + J.J." on Bethlehem, and "Trombone For Two", "Jai & Kai Plus 6", and "Jai & Kai At Newport" on Columbia, as well as titles with Quincy Jones' Orchestra. Among the musicians with whom they perform in the various line-ups are John Lewis, Charles Mingus, Kenny Clarke, Dick Katz, Quincy Jones, Lucky Thompson, Paul Chambers, Milt Hinton, Shadow Wilson, Hank Jones, Ray Brown and others. It makes for fascinating and enlightening listening as they present both familiar and original jazz repertoire in a variety of unusual musical settings, which include their renowned trombone octet, and it's an entertaining showcase for two of the most renowned jazz trombonists of their era.