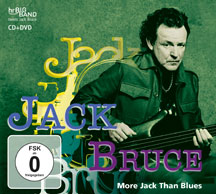 He is an icon of the Rock world: the legendary song writer, bassist, pianist and singer Jack Bruce. In 2006 at the 37th German Jazz Festival Frankfurt, he joined forces with the hr-Bigband to perform a highly acclaimed concert, presenting classic Cream songs and other landmarks of his career in gripping new arrangements. It was a magic moment of dialogue between Jazz and Rock that roamed between composition, improvisation and vibrant, virtuoso performances. The hr-Bigband is one of the most innovative German jazz ensembles of our times. Its imaginative programmes, quality musicians and high-profile projects have raised the Big Band of the Hessischer Rundfunk (German Public Radio of Hesse) to the Champions League of large ensemble jazz music and has set new musical standards. From Swing to the Avant Garde, it covers the entire spectrum of Jazz, as well as crossing over into Classical, Pop and World music. Together, projects with talented young musicians and international stars, concerts performances, radio broadcasts and CD recordings make up what the hr-Bigband is today.

Check out a feature in VINTAGE GUITAR»

An ideal testament to the continued vibrancy and virtuosity if a bona fide master.

It'll raise the hair on the back of your neck.

This one's a keeper, a strange combination that pays big dividends no matter what end of the musical spectrum you're invested in.