His career as a recording artist was tragically short, and this set offers a complete collection of his commercial output. 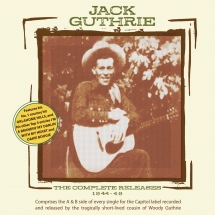 Jack Guthrie, a cousin of renowned folk singer Woody Guthrie, was born in Oklahoma in 1915, but like his cousin and thousands of others "Okies" his family moved to California in the 1930s when the Dust Bowl disasters and Great Depression made life unbearably hard there. Immersed in horses and music, he competed in rodeos and went with Woody to Los Angeles in 1937, where they got a regular spot on a radio show. He was still serving in WWII when in 1944 he recorded "Oklahoma Hills" which became a country No. 1. Recording more sessions after his discharge he had two more hits, but in 1947 he was hospitalised with tuberculosis, and died in early 1948 aged just 32. This collection comprises the A and B side of every single he recorded for the Capitol label, with some of the material released posthumously. His style was to some extent influenced by the great hillbilly and country pioneer Jimmie Rodgers, and on the sessions he was accompanied by top Los Angeles session musicians, some of whom were artists in their own right, and were billed as Jack Guthrie & His Oklahamans on the record labels. It features his No. 1 country hit "Oklahoma Hills", and his other Top 5 entries "I'm A Brandin' My Darlin' With My Heart" and "Oakie Boogie". His career as a recording artist was tragically short, and this set offers a complete collection of his commercial output.