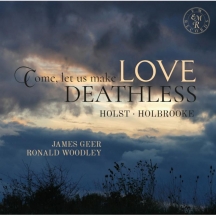 Come, let us make love deathless', explores two very different and intriguing aspects of early twentieth-century English music, with twenty-five songs by Gustav Holst (1874-1934) and Joseph Holbrooke (1878-1958), including world première recordings of twelve works, performed by tenor James Geer and pianist Ronald Woodley. James Geer is fast gaining a reputation as one of the UK's most engaging lyric tenors, whose voice has a particularly natural attraction to English songs of this period. He is partnered on the disc by Ronald Woodley, whose combined expertise as performer and musicologist brings a fresh research dimension to these new and rarely performed repertories. The recording was made in August 2018 in the Bradshaw Hall of the Royal Birmingham Conservatoire, engineered and produced by Andrew Hallifax.