James Suggs - You're Gonna Hear From Me 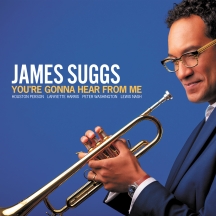 James Suggs has a distinctive sound, delivered with an extraordinary command of the instrument. James' inventive phrasing and remarkable breath control are teamed with an edge-of-your-seat unpredictability in his melodic ideas. Every note is played with purpose, and every solo tells a story. With the swinging, soulful saxophonist and producer Houston Person a truly 'dream team' band session.

''James Suggs began playing the trumpet at the age of 9 and has been touring internationally since the age of 16. Throughout his career, he has shared the stage with such greats as Kenny Burrell, Robin Eubanks, Chuck Mangione and Maria Schneider to name but a few. He is joined on You're Gonna Hear From Me by soul-jazz sax legend and producer Houston Person on 12 tunes, as well as a ''dream team'' band featuring Lafayette Harris on piano, Peter Washington on bass and Lewis Nash on drums. The tracklist includes fresh takes on such classic tunes as ''Laura,'' ''The Night We Called It a Day'' and ''It Shouldn't Happen to a Dream,'' all showcasing Suggs' inventive phrasing, remarkable breath control and spontaneous creativity.'' by MATT MICUCCI JAZZIZ MAGAZINE

Also working in a trad/straight-ahead jazz mode is trumpeter James Suggs on his debut album. Leading a quintet that features tenor man Houston Person, pianist Lafayette harris, bassist Peter Washington and drummer Lewis Nash, Suggs delivers a standards-heavy program that varies in style between cool, hard bop, and trad-from the second-line stylings of Suggs' original "My Baby Kinda Sweet" and the slow blues of "The Ripple" (another original) to a sweetly loping mid-tempo take on Duke Ellington's "It Shouldn't Happen to a Dream" and the hard-swinging "Rachel's Blues." Suggs has a wonderfully golden, burnished tone, and the group plays together marvelously. Here's hoping for more soon from this outstanding young talent.---CD Hotlist

Opening and closing the set with chestnuts that are played with no dust on them, this Florida trumpet ace hooks up at Van Gelder Studios with Houston Person in the producer's chair and it's hard to tell who's following whose lead. A solidly swinging set from a gang of pros that don't disappoint, especially when your hard earned money is at stake, these jazzbos are having a grand time, infectiously throughout. Solid throughout, this is one that you just have to hear. Hot stuff.

One thing is surely evident from hearing Suggs and company is that we will certainly be hearing more from him.