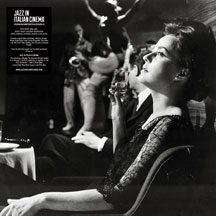 Jazz on Film Records' highest quality remastered, annotated collector's edition vinyl LP compilation 'Jazz in Italian Cinema' traces the emergence of jazz in Cinecitta through the late 1950s-60s and its crucial role in spreading jazz to a wider Italian audience. Composed by the famous "Big 3" film composers Piero Umiliani, Piero Piccioni and Armando Trovajoli as well as pioneering musicians such as Giorgio Gaslini, Chet Baker, the MJQ's John Lewis and Sandro Brugnolini, here are some of the earliest jazz soundtracks that emerged from the golden age of 'Commedia All'Italiana' through to cult experimental cinema (by film directors such as Mario Monicelli through to Michelangelo Antonioni). The expertly curated collection of high quality jazz ranges from the swing to cool/hard bop of the late 1950s to the expanding possibilities of both the modal and 'third stream' fusions in the early 1960s. Pressed on 180 gram vinyl, this is specialist, old school vinyl that features extensive, in-depth sleeve and insert notes written by Jazzwise film expert Selwyn Harris and the Sienna jazz Archivist/author Francesco Martinelli.