“An opulent filmopera. A feast for eyes and ears” - Diner’s Club Magazin 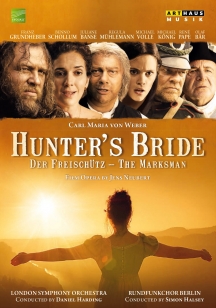 Hunter’s Bride” is a film opera based on the romantic opera Der Freischütz” by Carl Maria von Weber. Dreams and hopes of young people are told in this exquisite fairy tale. Max and Kaspar, both hunters, fight side by side in the Napoleonic Wars, as well as each other to conquer Agathe’s love. European cultural history becomes visible in an opulent historical panorama and one of the most beautiful pieces of music. The pictures of Norwegian director of photography Harald Gunnar Paalgard give a spatial dimension to the unique sound of the London Symphony Orchestra, which recorded in the legendary Abbey Road Studios. Performed by renowned opera soloists – Juliane Banse, Michael König, Michael Volle, René Pape – the film opera was a huge public success in European theatres. Filmed on 35mm film on original locations in Germany, the film opera dramatises the enchanted tale with stunning images, and surround-sound revives the music for the eyes and the ears of the audience.