A hard swinging, soulful debut by Vancouver saxophonist Jerry Cook. Walk In The Park sizzles from the opening downbeat. 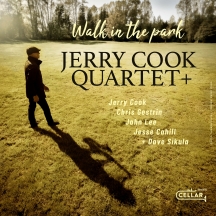 A Walk In The Park is an absolute delight to listen to from start to finish. The complexity is in the simplicity. The music reflects how Jerry is as a person: swinging and soulful. The all-star Vancouver rhythm section of pianist Chris Gestrin, bassist John Lee and drummer Jesse Cahill provide the perfect foil for Jerry's bluesy flourishes a la Arnett Cobb, Stanley Turrentine and Willis Jackson.

Tenor saxophonist Jerry Cook lists Stanley Turrentine and Gene Harris among his influences, so when he leads a jazz ensemble, you just know it will be a soulful, bluesy outing. This album of standards, ballads and originals was recorded soon after Cook debuted his quartet at Frankie's Jazz Club in Vancouver last fall. His bandmates are Chris Gestrin (piano), Jesse Cahill (drums) and John Lee (bass.) The ''+'' in the band's name is for guitarist Dave Sikula, who joins on certain tunes. Look forward to their Horace Silver-inspired take on ''Summertime,'' a surprisingly swinging arrangement of ''Smile'' and their transparent touch on ''Soul Eyes.''

Somewhere between blues and after-hours jazz, this sax man occupies a spot all his own. Kicking off with an original tune that gets right at home in your ear immediately, you can easily picture younger Tom Waits walking in out of the rain and hearing this crew only to grab them up as his new backing band. An ultimate in late night blowing, this is the company you need when everyone has gone home. Killer stuff throughout.