Jesus Shows You The Way To The Highway (Standard Edition) 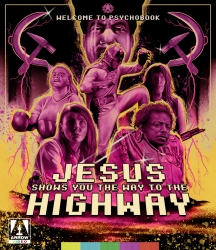 What do you get when you cross Afro-futurism, Cold War paranoia, the dystopian world of Philip K. Dick and 60s exploitation cinema, along with a hefty dose of Lynchian surrealism? The answer: Jesus Shows You the Way to the Highway, the second feature by Miguel Llansó (Crumbs) and one of the most striking and original films you'll see all year. The year is 2035, and Special Agent Gagano (Daniel Tadesse, Crumbs) dreams of leaving the CIA to open a business with his wife Malin (Gerda-Annette Allikas). Before he can hand in his resignation, however, a strange cyber virus attacks Psychobook, the CIA's operating system, forcing Gagano to enter cyberspace via virtual reality to combat the threat. Before long, however, the virus starts to reach out into the real world, destabilising the fragile socio-political order for its own ends, and Gagano, trapped in the VR world, must find a way out before it's too late. Featuring encounters with an Irish-accented Joseph Stalin, a kung-fu-fighting Batman, and Jesus Christ himself, to name but a few, Jesus Shows You the Way to the Highway is absurd, audacious and like nothing you've ever experienced before.

This is a weird and wacky viewing experience unlike any other... I personally loved this film simply because it is so strange, and as usual Arrow has provided a release with solid technical merits and some really appealing supplements. Recommended.

A massively original mash-up of exploitation tropes in a retro-futuristic spy thriller that is loads of fun.

if you dig Jodorowsky's El Topo or The Holy Mountain, you're probably going to love it

Jesus Shows You the Way to the Highway is everything the adventurous film fan is looking for. It is complex, original, fun, funny, and unlike anything you've ever seen before.

Unquestionably not quite like anything else before it, and that's a virtue from which cult followings are born.