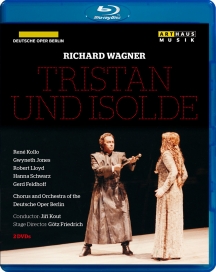 This production of Wagner, Richard;’s Tristan und Isolde” was recorded during the Deutsche Oper Berlin’s great tour to Japan in 1993. Directed by Götz Friedrich and conducted by Kout, Jiří, this interpretation of the adulterous love between the Cornish knight Tristan and the Irish princess Isolde was a great success.Wagner’s composition of Tristan und Isolde” was inspired by his love affair with Mathilde Wesendonck and the philosophy of Arthur Schopenhauer. Widely acknowledged as one of the peaks of the operatic repertoire, this music drama was notable for Wagner’s advanced use of chromaticism, tonality, orchestral colour and harmonic suspension. The score of Tristan und Isolde” has often been cited as a landmark in the development of Western music. René Kollo and Gwyneth Jones give brilliant performances and prove once again, why they belong to the world’s best Wagner singers.