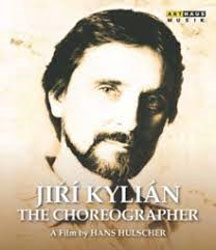 The acclaimed Czech choreographer Jirˇí Kylián had workedwith the Nederlands Dans Theater as artistic director and house choreographer continuously since 1975. From "a bunch of rebels, afraid of drowning in a lake of swans", the company and Kylián have gained an international reputation which places them in the heart of the established art world.This intimate portrait follows Kylián as he travels to Prague for the first time since the change of government and to rehearsals in Stuttgart, where he began his career as a dancer with John Cranko and choreographed his first ballet. There is also film of the Nederlands Dans Theater performing at a Gala Evening in Paris in the presence of Queen Beatrix and François Mitterrand, and an official visit to the company by former Czech premier, Václav Havel. Many extracts from Kylián's ballets are included, illustrating the breadth and diversity of his work to date as well as fascinating archive film and interviews with colleagues.