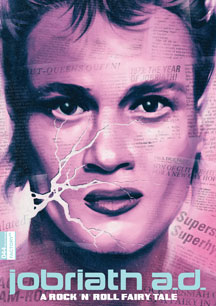 Seventies glam rock musician Jobriath was known as "The American Bowie," "The True Fairy of Rock & Roll," and "Hype of the Year." The first openly gay rock star, Jobriath's reign was brief, lasting less than two years and two albums. Done in by a over-hyped publicity machine, shunned by the gay community, and dismissed by critics as all flash and no substance, Jobriath was excommunicated from the music business. He retreated to the Chelsea Hotel where he died, forgotten, in 1983 at the age of 37, as one of the earliest casualties of AIDS. In the years since his death, new generations of fans have discovered his music through acts as diverse as Morrissey, Def Leppard, The Pet Shop Boys, and Gary Numan, all of whom have cited Jobriath as an influence. Through interviews, archival material, and animation, audiences can experience the heartbreaking and unbelievable story of the one, the only, Jobriath.

Neither for the ears of the elderly nor for those with middle-aged perspectives, Jobriath voiced the excess destitution of New York's most tormentedly aware, whose lives were favoured by darkness. Cinematic themes of desperate dramas in paranoid shadows were presented as choppy and carnivalesque melodies...Neither America nor England was quite ready.

Utterly enthralling, filled with rare archival footage and fleshed out with animation, insightful commentators, and lots of Jobriath's own music to make the case that a true genius fell through the cracks.

This accomplished and compelling documentary leaves some indelible marks.

An intriguing portrait of a talented artist whose career was doomed by his own hype machine and the public's unwillingness to accept his unhidden, uncoded homosexuality. The film is nicely supplemented by high-quality bonuses, including a vinyl record of previously unreleased music. Highly Recommended.