One of New York's best kept secrets, trumpeter John Sneider re-unites with his band for the first time in over 20 years! 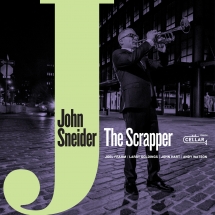 The Scrapper, John Sneider's first album released under his own name in 20 years, finds him re-united with his original band. He's among friends, doing what he loves: swinging. A lot can change in 20 years, but some things remain constant. For John Sneider, that includes the rhythm section of Larry Goldings on organ, Andy Watson on drums and John Hart on guitar, all of whom appeared on his first record.

It might be the trumpeters first record in 20 years but the personnel is the same as it was on his first record, and there's no dust on anyone. A hip player that's opted for the studio tan over the years shows that he's one of the few that doesn't need the feedback of a live audience to keep his chops sharp. A tasty mainstream date with an edge. Playing with a sure hand and a talented lips, if you haven't met the Scrapper yet, it's time to get hip to what all the hipper New Yorkers already know---he's got it on the ball and hits it out of the park. Well done.

''...The Scrapper is an excellent release that pays homage to the tradition while still sounding current in 2020.''