John Webber - Down For the Count 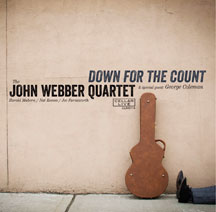 Recorded live before a studio audience at New York City's Unity Center, Down for the Count, named for an actual Italian Count and Bologna benefactor to many in NYC's straight-ahead jazz scene, fulfills the expectations of the bandleader; “I got the guys I was comfortable working with, because I know that with them, it's always going to be swinging.” And swing it does! Featuring a mixed program of originals: “Lulu's Lope” (named for Webber's daughter), “Twilight in Seville” (reflective of the guitarist's time spent listening to Andrés Segovia and one of the few pieces contained here in which Webber lays down a beautiful chordal introduction utilizing Spanish harmony