Johnny Fuller, born in Mississippi in 1929, was nevertheless primarily associated with California blues, although 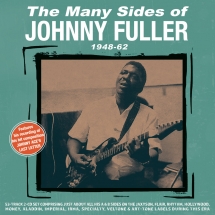 Johnny Fuller, born in Mississippi in 1929, was nevertheless primarily associated with California blues, although his recordings over the years covered a remarkable range of musical bases within the broad categorisation of blues. He also recorded for an extraordinary number of record labels, many of them small under-resourced independent operations on the west coast as he played around the San Francisco Bay area during the 1950s, which helps to explain his failure to register the chart hits that many of his recordings undoubtedly merited. This 53-track 2-CD set comprises just about all his A & B sides on the Jaxyson, Flair, Rhythm, Hollywood, Money, Aladdin, Imperial, Irma, Specialty, Veltone & Art-Tone labels during this era, several of them owned by serial entrepreneur Bob Geddins. In the course of recording in so many different environments, with different groups and different producers, his music ranges from gospel-flavoured country blues under the name of Brother Johnny Fuller through hard-edged guitar-based blues to horn-heavy R&B, and later flirting with out-and-out Elvis-impersonating rock 'n' roll, with various other shades of blues visited along the way. He was a talented singer, guitarist and songwriter, and this varied set offers an entertaining showcase for the qualities of an artist who should have had more success than he enjoyed.