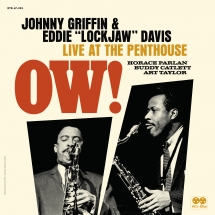 The title - which features stellar, previously unreleased performances captured at the Seattle club the Penthouse in May-June 1962 -- will initially be available on 180-gram vinyl mastered by Bernie Grundman, and subsequently be issued on CD Dec. 6.

Reel to Real - a partnership between Vancouver-based jazz impresario and saxophonist Cory Weeds and Resonance Records co-president and noted ''Jazz Detective'' Zev Feldman - was launched on Record Store Day 2018 with a pair of releases that included Swingin' in Seattle, live sessions by Cannonball Adderley's quintet recorded at the Penthouse in 1966-67. Resonance has previously plumbed the Penthouse's deep archives for its albums by Wes Montgomery (Smokin' in Seattle) and the Three Sounds featuring Gene Harris (Groovin' Hard).

In his notes included in the 28-page booklet that accompanies the package, Weeds recalls, ''Upon hearing the Johnny Griffin-Eddie ''Lockjaw'' Davis tapes, I got that excited feeling in my stomach again, called Zev, and said, ''We have to put this music out, whatever it takes.''

Feldman adds, ''These recordings are a gift that keeps on giving so much elation and positive vibes, which were captured with this music. It will now live on forever thanks to producer/radio legend Jim Wilke; engineer Fred Stimson, who recorded these broadcasts that were transferred from the original analog tapes; and Charlie Puzzo, Jr., son of the Penthouse's proprietor.''