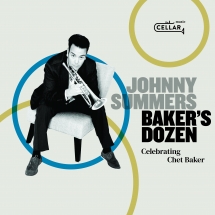 Trumpet player and vocalist Johnny Summers has been a mainstay in the Canadian jazz scene for years, and steps out on Cellar Music Group with ''Baker's Dozen: Celebrating Chet Baker'' his debut for the label. This swinging and soulful tribute to the music of Chet Baker features 13 of Johnny's arrangements, representing some of the songs best known from Chet in his legendary career as a singer & trumpet player. For Baker's Dozen, Johnny assembled a cast of musical cohorts who share his vision and approach for the history of these songs, while looking forward in their modern interpretations.

''I studied Chet's approach to music so intently when I was just starting out as a player some 20 years ago,'' says Summers. ''At that time I tried to copy everything - nuance, tone, and phrase. Now I just play what I feel is musical and moving in the moment. I wanted us to be free to explore the approach that Chet and his band played, from the soft and sublime, to a fiery approach that he wasn't as known for. However, I wanted myself and the musicians to be free to be ourselves in that context.''

This swinging album features a fantastic rhythm section complemented by 2 different drummers on various recordings. The special guests are numerous and in addition to them, Johnny arranged for and recorded songs featuring string quartet and the Calgary Jazz Orchestra, which he arranges and conducts.