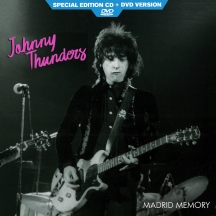 If you're a Dolls or Heartbreakers fan, Johnny Thunders - Madrid Memory is obviously an absolute must have, but I'd even recommend this to folks that have never experienced the majesty of Johnny Thunders in order to make them instant converts!

This DVD is a piece of history and a treasure of a recording worth collecting and putting on for your kids - the next generation.