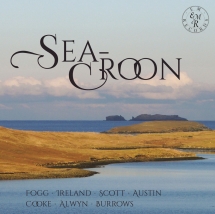 The 1920s were a period of ferment in English musical life: some composers were working within a late Romantic vein; others (like their European contemporaries) were collecting and reworking folk music; and others still were pursuing their own paths. 'Sea-Croon: The Voice of the Cello in the 1920s' explores these diverse avenues with a sequence of works, all but one World Première recordings. The disc opens with Eric Fogg's 'Poem', written for the composer and his future wife to perform; it looks beyond English shores and there are echoes of Rachmaninov. Much of Fogg's music has sadly been lost, and his 'Poem' reveals what is an impassioned and distinctive voice. There follow John Ireland's magnificent Sonata, a cornerstone of the English repertory for cello and piano; and one of Cyril Scott's transcriptions of an Irish folksong. Frederic Austin is perhaps better known as a baritone, but his substantial Sonata, with demanding writing for both instruments, reveals a composer at home with an evolved, harmonically complex and sometimes rhapsodic style. The disc's title track, 'Sea-Croon', is a very rare chamber work by Greville Cooke, a previously undiscovered English Romantic championed by EM Records. Despite the gentle nature of this folk-style creation, the musical language, as with Cooke's other works, surprises with its unexpected turns. William Alwyn's Two Folk-Tunes show how comfortably a folk-style creation and a direct transcription sit together. The disc closes with the Sonatina by Benjamin Burrows, who lived in Leicester and was a respected teacher, music publisher and horologist. His music has come to wider attention in recent years, and the inspiration for his very personal musical voice seems to have been a female student, for whom he wrote more than 90 songs. The intense lyricism paired with remarkable concision found here is a long way from the expansiveness of John Ireland. 'Sea-Croon' presents a fresh view of the English cello repertory in the 1920s, away from those composers - Bainton, Bantock, Bax, Bowen, Gurney - whose cello works have already been brought to public attention.