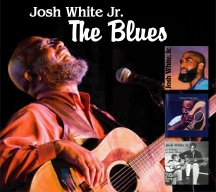 At the age of four, Josh White Jr. made his professional debut alongside his father at the Café Society in New York City. In 1949, he co-starred with the elder White on Broadway in "How Long Til Summer?" For his work on the show, Josh White Jr. received a special Tony Award.[1]

In 1956, Josh White Jr. made his solo recording debut on Decca with "See Saw," co-written with Marvin Hamlisch. Hamlisch was a classmate of White's at the Professional Children's School along with Christopher Walken, Sandra Dee, Leslie Uggams, and Elliott Gould.[1]

In the 1960s, White became a popular attraction in the college tour circuit, while continuing to record.[1]

In 1979, he headlined at concert special for PBS and starred in a stage biography of his father a few years later.[1]

He received a Grammy nomination in 1987 for Jazz, Ballads and Blues, another tribute to his father.[1]

White continues to record. One of his most recent albums was Tuning for the Blues, a collection of folk tunes, which was released in 2011.[1]