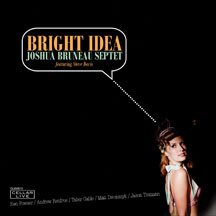 I first met trumpeter Josh Bruneau when he auditioned at The Hartt School's Jackie McLean Institute of Jazz in 2006. It was readily apparent that this was an exceptional and talented young man. He had a sound and a natural feel for the music, which he'd already cultivated while growing up in the Burlington, VT area. He was deeply influenced by his grandfather, Peps' musical tastes, namely Louis Armstrong, and the classic big band era masters such as Ellington, Goodman, Miller, Basie, etc. Josh also had excellent guidance from his music teachers, and began listening to Art Blakey & The Jazz Messengers, Miles Davis, Clifford Brown, Lee Morgan, Freddie Hubbard and many more during high school.
After Bruneau's enrollment at Hartt, it wasn't long before my colleague on faculty, bassist Nat Reeves and I were regularly hiring young Josh on gigs, as well as playing special Hartt School concerts with including Dionne Warwick in 2008 and The Hank Jones Honorary Doctorate Concerts at Lincoln Theater, University of Hartford in 2009.

During the past eight years, it has been a pleasure and inspiration to watch and hear Josh develop alongside a cadre of super-talents coming out of the Hartt School/Hartford scene like Jovan Alexandre, Jonathan Barber, Andrew Renfroe, Matt Dwonzsyk, Taber Gable, Shenel Johns, Matt Deschamplain & Andy Breskin, to name a few. Bruneau's sterling trumpet sound has led the way for this young group of rising stars. He plays with clarity, exuberance and swagger, all the while continuing to add to his already sophisticated harmonic palate. But most of all, when I hear Josh play his trumpet, I hear soul and beauty. This is what jazz or any music, is all about. He can play brash, or pretty. He can burn, or linger on a phrase. Josh's ability to blend & phrase with fellow frontline horn players is uncanny. He's one of the best I've played with. In sum, he is a natural jazz musician, who is just coming into his own at age 26 and his playing on this recording is exciting proof that his is a trumpet voice to be reckoned with for many years to come!